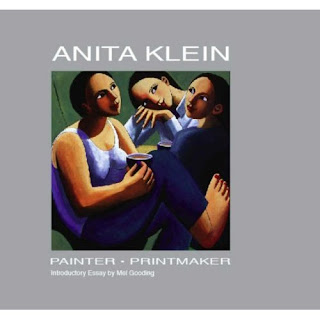 I have always loved the work of Painter and printmaker Anita Klein. Her work is a visual diary of her family life bringing up her two girls and situations of domestic bliss, cooking, watching TV, drinking wine (a lady after my own heart!) And her nude figure work is beautiful. The reason I love her work so much though is not just because the prints are so beautifully done but because I can relate my own life directly in her work, and even though her figures are her and her daughters and husband, they are drawn in a way that it could be anyone too...does that make sence? ( I can see that you're thinking - eeee you've missed your vocation as an art critic, you have such an amazing way of describing art!) but yeah, she's fab! 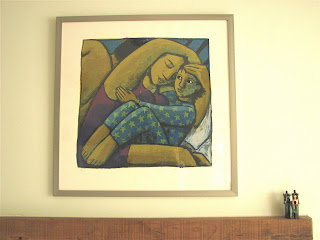 We're actually the very proud owners of two pieces of her artwork, ( I'd like to say I'm an art collector, but the fact that when I purchased the above piece we had to re-mortgage the house and live off baked potatoes for a month might mean that I can't really officially use that title) The above piece is called Leila in the morning. It reminded me so much of Lily sneaking into bed with me every morning for a cuddle and the colours are so beautiful, my naff photo doesn't give them justice. 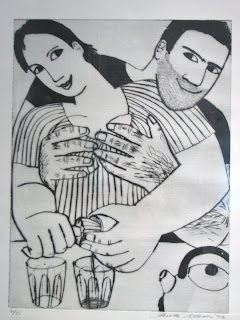 This peice is called squeezing lemons, which is an activity my husband loves to do when I'm washing up or putting the washing in the washer! I had to buy it for Chris because it was just him! and I'd had my hair cut short at the time so it was perfect! It's a drypoint print and hangs in our bathroom so when I'm relaxing in the bath with a vino Rose I can gaze at it's fabness! I've just bought a book of her recent works which documents her girls growing up and leaving for college, it's so inspirational. I would love to buy another piece, an oil painting or a woodcut...how many different fillings can you think of for baked potatoes?
Labels: fab books talented artists 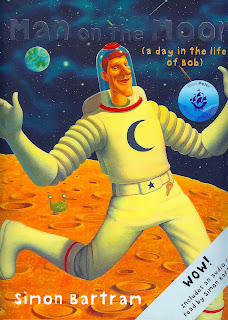